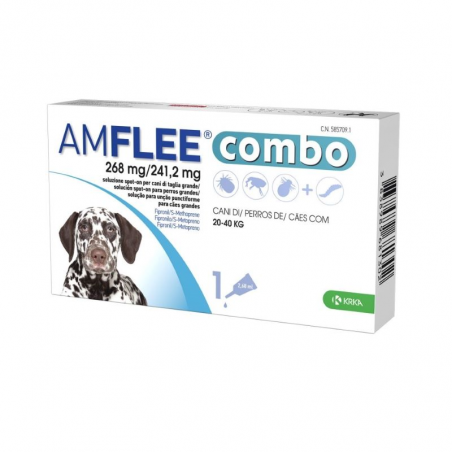 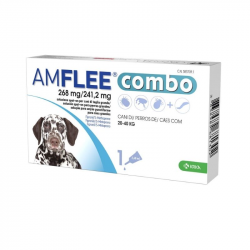 Indicated for the treatment of flea, lice and tick infestations in dogs.

Amflee Combo it is indicated in dogs to be used against flea infestations, alone or in association with ticks and / or biting lice.

- Treatment of tick infestation (Ixodes ricinus, Dermacentor variabilis, Dermacentor reticulatus, Rhipicephalus sanguineus). The drug has a persistent carcinogenic efficacy for up to 4 weeks against ticks

The veterinary medicinal product can be administered as part of a treatment strategy for the control of Flea Allergic Dermatitis (DAPP), when previously diagnosed by the veterinarian.

Fipronil is an insecticide and acaricide belonging to the family of phenylpyrazoles. It acts by interacting with chlorine-ligand channels, especially those terminated by the neurotransmitter gamma-aminobutyric acid (GABA), thereby blocking the pre- and post-synaptic transfer of chlorine ions across the cell membrane. This results in uncontrolled activity of the central nervous system and death of insects or mites. Fipronil kills fleas within 24 hours, and ticks (Dermacentor reticulatus, Dermacentor variabilis, Rhipicephalus sanguineus, Ixodes scapularis, Ixodes ricinus, Haemaphysalis longicornis, Haemaphysalis flava, Haemaphysalis campanulata) within 48 hours after exposure.

In the absence of safety studies, the minimum interval between treatments is 4 weeks.