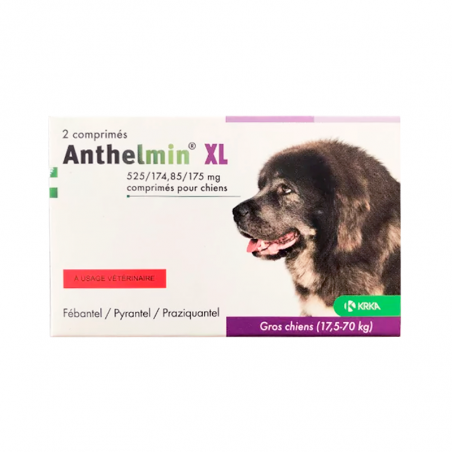 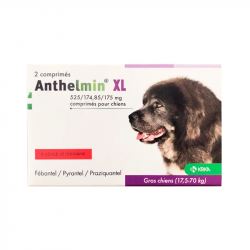 Anthelmin XL it is indicated for the treatment of mixed infestations by the following nematodes and tapeworms in large adult dogs.

Pirantel acts as a cholinergic agonist. Its mechanism of action consists of stimulating the parasite's nicotinic cholinergic receptors, inducing spastic paralysis and, thus, allowing its elimination from the gastrointestinal (GI) system through peristaltic movements.

In the mammalian system, febantel is subjected to the closure of the ring, forming the derivatives fenbendazole and oxfendazole. It is these chemical derivatives that exert the anthelmintic effect by inhibiting the polymerization of tubulin. The formation of microtubules is thus prevented, resulting in the disturbance of vital structures to the normal functioning of the helminth. Glucose absorption is particularly affected, which leads to depletion of cellular ATP. The parasite dies after the depletion of its energy reserves, which occurs within 2 to 3 days.

Praziquantel is rapidly absorbed and distributed by the parasite. In vitro and in vivo studies have shown that praziquantel causes severe damage to the parasite's whole, which results in contraction and paralysis. There is an almost instantaneous tetanic contraction of the parasite's musculature and a rapid vacuolization of the integument's syncytial. This rapid contraction was explained by changes in the flow of divalent cations, especially calcium.

In this fixed-association veterinary medicinal product, pirantel and febantel act synergistically against all relevant nematodes (ascarids and hookworms) in dogs. In particular, the spectrum of action covers Toxocara canis, Toxascaris leonina, Uncinaria stenocephala and Ancylostoma caninum. The action spectrum of praziquantel also covers species of tapeworms in dogs, particularly Taenia spp.and Dipylidium caninum. Praziquantel works against the adult and immature forms of these parasites.

This veterinary medicine is not recommended for use in dogs weighing less than 17.5 kg.

The recommended doses are: 15 mg / kg body weight of febantel, 14.4 mg / kg of pyrantel and 5 mg / kg of praziquantel. Equivalent to 1 tablet for every 35 kg of body weight. The tablets can be divided into halves.

There is no restriction on access to food before or after administration of the veterinary medicinal product. The tablet (s) can be administered directly to the dog or concealed in food. To ensure delivery of the correct dose, body weight should be determined as precisely as possible.

For the control of Toxocara, administration to lactating bitches should be carried out 2 weeks after pregnancy and every 2 weeks until weaning. In case of severe nematode infestation, administration should be repeated after 14 days.

As a routine control, it is recommended to administer a single dose every 3 months.

Because it is a veterinary medicinal product subject to medical prescription, we request to send it to the email: [email protected]/.