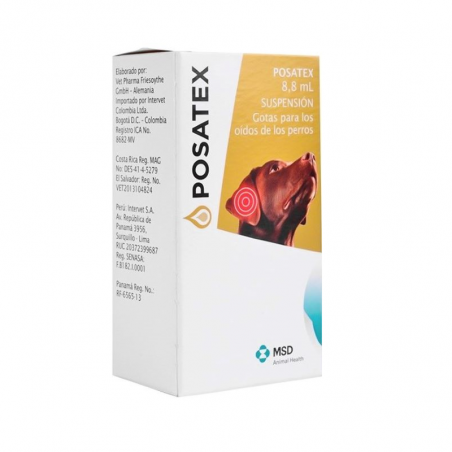 Treatment of external otitis in dogs.

Orbifloxacin is a broad spectrum synthetic bactericidal agent classified as derived from quinolone carboxylic acid, or more specifically a fluoroquinolone. The bactericidal action of orbifloxacin results from interference with the enzymes DNA topoisomerase II (DNA gyrase) and with DNA topoisomerase IV which are necessary for the synthesis and maintenance of bacterial DNA. This damage stops the bacterial cell from replicating, quickly leading to cell death. The speed and extent of death are directly proportional to the concentration of the drug. Orbifloxacin has an in vitro activity against a wide range of Gram-positive and Gram-negative organisms.

Mometasone fluorate is a corticosteroid with high topical potency but with few systemic effects. Like other topical corticosteroids, it has anti-inflammatory and antipruritic properties.

Posaconazole is a broad spectrum triazole antifungal agent. The mechanism by which posaconazole exerts its antifungal action involves the selective inhibition of the enzyme lanosterol 14-demethylase (CYP51) involved in the biosynthesis of ergosterol in fungal spores and filaments. In in vitro tests, posaconazole demonstrated antifungal activity against most of the approximately 7000 strains of spores and filaments of the tested fungi. Posaconazole is 40-100 times more potent in vitro against Malassezia pachydermatis than clotrimazole, miconazole and nystatin.

Auricular administration. The outer ear canal must be thoroughly cleaned and dried before treatment. Excess hair in the treatment area must be cut. Shake well before use.

Treatment should continue for 7 consecutive days. After application, the base of the ear can be gently massaged to allow the veterinary medicine to penetrate the lower part of the ear canal.

Because it is a veterinary medicinal product subject to medical prescription, we request to send it to the email: [email protected]